The set up: My foodie buddy Anita of MadHungryWoman and her son Sebastian of NachoTypicalKid decided to join me for the 4th of July fireworks off Main Beach, Laguna Beach California, which is walking distance from my humble home (yes yes, spoiled I am). I was very happy for it. How amazing is the daily opportunity sit upon beach chairs ON the beach, watching fireworks??

Our view from the beach:

It was their first time doing just that so I was hoping I could make it special by bringing some great food.

Character flaw of mine: wanting to impress and then deciding on a dish I’ve never made before. What would I have done had it not turned out? I would have run to the store and bought something pre-made, then at home ‘Austinized’ it (my friend’s term for a generic dish I’ve gotten my culinary fingers upon) to my acceptable tastes.

Though, this time, surprisingly, it turned out pretty darn good.

I had bought a tube of Amore Pesto Paste (concentrated) some time ago, on a whim and well priced at a Henry’s, after having seen & used their Tomato Paste (often used on cooking shows) though not really knowing what I was going to use it for. I’d used the tomato paste before & found it too pricey for regular consumption, the tube is just not big enough for the amounts I normally use. I prefer the much more cost-effective, and equally delectable, Costco case of S&W Organic (no less) Tomato Paste of 12 cans for….dirt cheap.

I’m getting off track here. This isn’t about tomato paste but PESTO. Come on people, you could have reigned me in here a lot earlier….jeezzzz (please do so later, as I am sure to meander)!

It actually turned out decent…tho honestly, not great. They liked it and we all ate it up. I served it up on a crunchy baguette (tasty but soooo wrong a bread option for this type of dish) and head smackingly forgot to bring the provolone for it. Aaarrrgghh, I almost went home for it (i hate to not have the ingredients for a perfect dish when I’ve envisioned it so) but traffic & parking kept my ass planted on the beach.

Afterwards, I knew I could do the dish better, and after a firm nudge from an outside source, I aimed to do just that.

I’m not one to write recipes down. I the heat of creation, it just doesn’t compute for me. It’s only after a few times of tweeking that it occurs to me “Dude, write that shit down or you’ll never be able to recreate it again later”. So upon that sage ID advice, the recipe below is #3 of five attempts at gastronomical perfection though I think I’ve moved onto to #5. 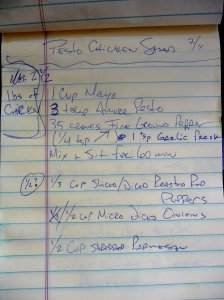 So you got that right? The sketchy recipe above all makes sense and is easily made by you..right??? Good luck with that, cuz I’m not sure I could do the same….and it’s my own recipe!

Alright, alright, I’ll try to break it down for you, step by step (and of course, since I’ve ADD, I’ll most likely be skipping a few steps. Ask for clarity please).

1/2 Cup Roasted Red Peppers (heaping is what I used)

Mix the first five ingredients together and let sit in the fridge for at least 30min, tho an hour is best, giving it a good mix-a-bout every 15 min or so. We need to marry these flavors together, yes?

What to do, during that hour…..what to do….OH let’s see, I still need the main ingredient CHICKEN and I’m thinking some roasted red peppers would be brilliant here, so now i’ve got something to do.

Okay, I roasted my own red peppers on my gas stove, which took a good 30min of roasting to a lovely charr all over (you can do this on a BBQ outside as well), then I put them into a bowl, sealed it in cling wrap, which steams them to loosen their skin from their flesh. I then seeded, scrapped/skinned them & chopped/diced the beauties. If you’re not up to this, most good grocery stores should carry a jar of roasted red peppers that will work just fine. Dice or slice it up for a heaping 1/2 cup worth or red, juicy and flavorful loveliness.

As to the chicken: I bought 2.5 lbs of skinless chicken breast from my Ralph’s butcher case, tho after noticing that the wrapped pre-processed kind (Fosters) was $6.99 a pound and the local Ralph’s had them at just $3.99 a pound, I felt I had accidentally bought the better option.

How to cook this chicken was now the current hurdle. I cook chicken breast often, tho every time I am fearful that I will over cook it to dry/toughness or undercook it to illness. This time I took the very large breasts and decided to slice them into manageable & a bit more uniformly workable pieces that I felt would cook up evenly…which worked beautifully. I cooked them ‘Low & Slow’ in a large sauce pan. I knew poaching was an option but I’ve heard too many times that it leeches away the actual chicken flavor which is what I did not want. So I thought, why couldn’t the same technique that works for beef work for chicken??? Guess what, it does! The chicken chunks turned out tender and juicy without the ‘sear’ aspect I did not want. Hmmmm, the ‘sear’ factor may actually add a depth of flavor I hadn’t anticipated…more hmmmm…I’ll have to try that in future batches.

Firmly springy was the guage for doneness. It was beautiful in keeping the flavor in, and most importantly, it’s juicyness.  A little pepper makes them look all the more appetizing for a recipe blog post (don’t cha think?) and doesn’t hurt in the least in adding a more depth of flavor to the overall dish. If your not up to this extra time, I’ll assume the canned, bagged or rotisserie variety of chicken will work just as well.

Once removed and cooled, dice it up! I’m thinking the next time I make this I’ll try the shredding process which might just stay on the bun better.

So from here on out, it gets easy.

Throw it all together: roasted red peppers, onions and mayo, then mix into a bowl, grate the parmesan cheese in, then mix away…doesn’t get much easier than that, does it? 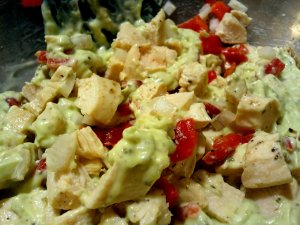 I served it on a baguette initially, with provolone and freshly sliced tomatoes, though absolutely delicious, the baguette was too tough of a crusty bread for the tender innerds. The tasty insides gushed all outside. So after a bit of testing, a good french roll works beautifully. Also, a nice flour tortilla wrap is a brilliant option as well. Lay a single layer of provolone, smear a hearty spoonful of the salad upon the tortilla then top with fresh Arugila or Spinach greens, sliced tomatoes and you’ve got a beautifully delicious lunch, dinner or snack.

Be sure to top with more  freshly chiffonaded basil for the best burst of pesto/basil flavor. 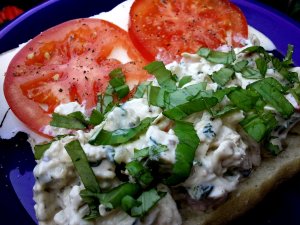 And if your into the low carb thing, use a slice of Provolone as a tortilla/taco shell and you’ve got an extremely low carb snack. 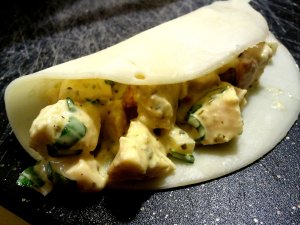 I hope you try this recipe out and if you do, please let me know how it worked (or not) for you.